A New High in Dinkytown

What follows is an observation essay I wrote in October 2008 for an English Composition course at Northwestern College in Saint Paul, Minnesota.  Touching on a growing movement known as “Christian Mysticism,” it describes events which took place nearly two years ago. I must say that I have limited knowledge as to whether or not they are still going on at the location in focus in this essay.

“We’re jukin’ Jehovah, getting high on the Most High, getting whacked by El Shaddai.  Come on in and let’s get intoxicated at The Hot Spot here tonight.”  This is what anyone, believer and unbeliever alike, might hear if they happen to wander a certain stretch of sidewalk in the heart of Dinkytown on a Friday night. Located across the street from the popular Varsity Theater, The Hot Spot is planted strategically in the University of Minnesota’s vibrant and crowded entertainment zone, a four-block area on the north side of the nation’s fourth largest university.[1] Despite its limited space, Dinkytown offers a vast selection of services, from eateries to salons to bike repair shops and more.[2]

I found the area crawling with humanity when I arrived last Friday around 10 pm, and an available parking space was just about as scarce as a July snowfall in Florida.  Taxis were circling the block, looking for passengers not sober enough to get behind a wheel themselves. I had never been to Dinkytown after dark, but I had recently become aware of Brandon Barthrop, a colorful individual who believes that it is his destiny to disciple Minneapolis and the United States, eventually achieving “global conquest in cooperation with all God’s apostleships.”[3] I knew from his ministry website[4] that he and his associates could be found at The Hot Spot on Monday and Friday nights, and I was curious to see them in action. 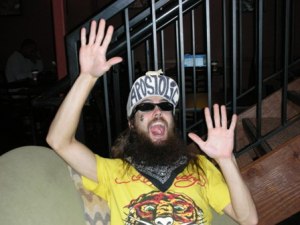 The first person to greet me just outside The Hot Spot was Larry, a tall and friendly African-American.  “How’s it going?  Come on in and check us out.”  Standing just outside the propped-open door we enjoyed a good conversation, raising our voices above the racket inside.  Larry informed me that it was also his first time, but that he personally knew the musicians inside and they would often fill him in on what happened at The Hot Spot.  He pointed out a 24-hour prayer room across the street, and began to give me a quick synopsis of the ministry that takes place at The Hot Spot and in Dinkytown.

My own research later confirmed much of what Larry told me.  Director John Tolo opened The Hot Spot in early 2007 as a Christian café with free coffee and internet access.  Tolo, a Catholic, discovered this location while searching for a venue to run the ecumenical Alpha Course, a practical exploration of the Christian faith.  He ended up partnering with Omar Bambara, whose print shop (in the same building) helps to fund The Hot Spot.[5] Tolo’s stated goal is to see the lost found, the blind see, the deaf hear, the dead raised, and all of “Dinkytown and the U of M [to] know that Jesus Christ is Lord.”[6] 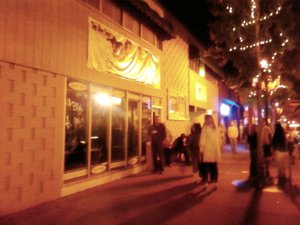 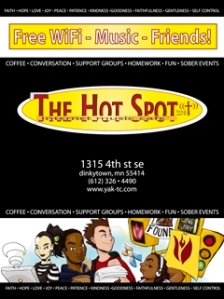 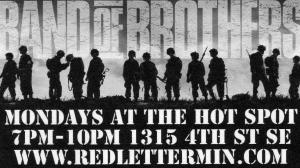 An Alpha course is held there on Sunday and Wednesday evenings,[7] and Intervarsity Fellowship uses the building on Tuesdays.[8] Hot Spot outreaches are said to include prayer walking, intercession, praying for and blessing people in Dinkytown, and ministering through prophetic gifts.[9] Live music is featured on Thursday, Friday, and Saturday evenings.

Brandon Barthrop refers to Friday night’s routine as “Apostolic Hip Hop,”[10] and I followed Larry inside to experience it myself.  ChristLike Tone and Tru Serva are the featured artists on Friday nights, and they were in full swing as I joined Larry for a free cup of coffee at the back counter.  “I’m gonna rap for Christ like it’s goin’ out of style,” one of them intoned. They were certainly talented, and plenty of passersby dropped in to see what the buzz was all about. Several individuals took turns showcasing their talent on a large checkered square in the middle of the floor, performing headstands, spinning, and experimenting with other forms of street dancing.  As midnight drew closer, even more people gathered outside to view the happenings through the glass windows that stretched from the ceiling to the floor. 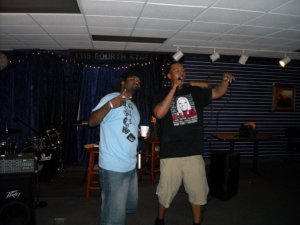 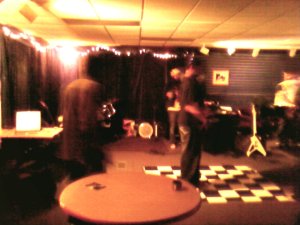 Not everyone was on their feet “juking Jehovah.”  Some sat at small tables chatting with friends or working on their laptops, while others lounged on sofas off to the side of the stage.  The entire area of the room was somewhat larger than an average living room. While there weren’t enough seats for all of the 20-25 patrons, everyone had room to move around.  Occasionally someone would walk in with a slice of pizza or another item purchased from a nearby vendor.  I couldn’t spot anyone who appeared to be above the age of 35.

Sarah was one of the younger ones.  She came over to talk to me after Larry stepped away, and she eagerly testified that The Hot Spot had changed her life and saved her from a life without purpose.  “God’s just doing something huge in Minneapolis.  We’re at the center of it here, and I really feel like I have purpose now, ever since I got connected to this place.”  She told me that the owners had barely been making their rental payments for the last couple of months, but they were pressing on because the Lord had showered them with prophetic words which indicated they would see great signs and wonders and tens of thousands being saved in the area.

“Where’s Brandon?” a long-haired man asked a few minutes later, interrupting my note taking.  “Who’s that?” I replied, pretending not to know.  “Oh,” he said with a mischievous grin, “he’s the guy with the long dreads and the beard.”  He had good reason to grin, as Brandon was simply impossible to miss.  I knew what he looked like from his internet videos[11] and I had easily picked him out of the crowd within seconds when I first walked in.  It wasn’t just his long dreadlocks and scraggly beard, his white cap with the word “APOSTOLIC” written in large letters, or the fact that he was sporting dark sunglasses in a dimly lit room.  He wandered around “smoking the Lamb of God,”[12] literally taking long drags from a toy lamb that he carried with him, and then exhaling dramatically.  This appeared to be the source of his intoxication, wobbly amble, and apparent constant struggle for equilibrium.  Saints and heathen alike were greeted with this behavior.

“It’s a powerful prophetic act,” Brandon told a drunk guy outside who asked him about it, and he urged him to “partake of the mystical, heavenly bliss” and the “wine barrel of heaven” so that he too could get “perma-whacked in the glory of God.”  He emphasized to the bewildered young man that “we aren’t drunk on alcohol here; we’re intoxicated on Papa’s breast milk.”[13] All the more mystified, the young man eventually moved on to a different, likely more sensible, form of entertainment.  That’s when I made my move. Bracing myself for what I might hear, I decided to talk to Brandon myself.

“We hit the streets wherever the Spirit leads,” Brandon told me when I asked him about his ministry and his involvement at The Hot Spot.  “We see signs and wonders, miracles, and we’re establishing apostolic government.”  He explained that in addition to covering the streets of the Twin Cities with the mystical glory, they also did a lot of media ministry.  He then informed me that if I wanted to bear spiritual fruit I needed to “drink the Godka, smoke Jehovahjuana,” and make it a priority to get “sloshed, whacked, lambified, and blast-mongreled in the glory, ra-ta-ta-ta-ta.”[14] He said that the key was to get high, stay high, and never come down.  “That’s why I’m smoking the Lamb,” he explained, using his thumb to press the lamb’s tiny head to his lips while tilting his own head back and drawing in a noisy breath.  With a stupefied expression on his face, he launched into an incoherent monologue and seconds later simply stumbled back into The Hot Spot, leaving me standing on the sidewalk speechless. 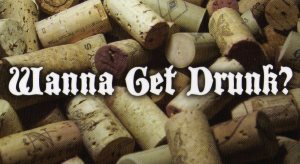 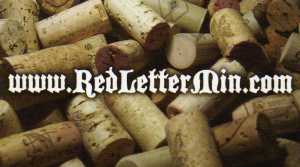 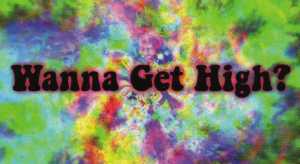 (Business cards placed on a table outside of The Hot Spot)

Christian, his associate, picked up where Brandon left off.  Christian sported lip and nose rings, and was rather aggressive in his approach.  Taking a small New Testament in his hand, he tilted it back and showed me how to “smoke the Word” and achieve “drunken glory.”[15] He said he also “smokes baby Jesus” and especially enjoys “Tokin’ the Ghost.”  I understood the latter act to be a recent phenomenon among some Charismatic Christians in which adherents reportedly take in a hefty dose of the Holy Spirit by feigning the act of smoking a joint.  Christian evidently presumed that I was familiar with his terminology.  In fact I was, having recently been exposed to the New Christian Mystics and their practices, but it was still quite an assumption on his part.  Perhaps he was exercising his prophetic gifts. 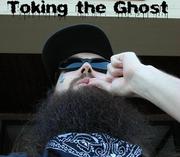 Suddenly, as if to avoid giving any further explanation, he grabbed my elbow and wrist firmly with both hands and demanded, “Let me pray for you right now.”  Wobbling, nearly falling over, and repeatedly saying “Whoa,” Christian prayed that I would “find Jesus, get whacked and never turn back.”  Finally loosening his grip on my arm, he tried to “breathe an impartation of drunkenness” onto me, but I pulled away.  No, thank you, I thought to myself, watching as another taxi drove by looking for the inebriated; I would rather drive my own car home.

[6] Brian Malley, Minnesota Christian Chronicle, The Hot Spot Internet Music Café Reaching Out to Dinkytown Community, http://www.mcchronicle.com/Articles/Feb08/Art_Feb08_07.html, retrieved October 7, 2008. In this article and elsewhere, Tolo refers to God as our “Higher Power.” See also The Hot Spot Facebook Page, http://apps.facebook.com/causes/40282?m=9235c&recruiter_id=10449570, where he says that The Hot Spot exists for those who wish to “[s]hare faith and seek a relationship as individuals and as a community with our Higher Power (God as we understand Him).”

[14] Some of Brandon’s vocabulary is uniquely his own, but other expressions and practices are clearly and admittedly copied from John Crowder and the New Christian Mystics. See the following sites: http://www.drunkenglory.com/Media.html, http://www.youtube.com/user/SonsofThunderPub, and http://www.thenewmystics.org/.

[15] Brandon Barthrop, Huffing the Bible for the Breakthrough, http://www.youtube.com/watch?v=0VGe9-yGHRE, retrieved on October 7, 2008.