The following study was written by Michael Battle, a friend on Facebook who also posts regularly in a group I belong to. It’s a good study of the words “forever” and “everlasting” in the Old Testament, as they are used concerning the land of Israel, circumcision, the feasts, the Sabbath, and other ordinances of the law of Moses. This study has implications for the claim that the land of Israel always has belonged, and always will belong, to the physical descendants of Abraham:

The land of Canaan is said to be an inheritance for the decedents of Abraham FOREVER (Genesis 13:15; 17:8).

Does this then mean that the promise of the land inheritance has relevance today? If we were to take Genesis 13:15 and Genesis 17:8 at face value without considering the balance of scripture, then we would certainly have to come to a conclusive yes.

Therefore we need to ask, “Does the balance of scripture support our interpretation of the land inheritance?”

That’s certainly a good start if we are going to build a case that the land inheritance is still relevant.

However, we immediately have our first hurdle before we ever get out of Genesis 17. In verses 10-14 we read that physical circumcision is an EVERLASTING covenant and that the land inheritance coincides with circumcision. The “uncircumcised” have no share in the covenant through which the land was to be inherited.

This immediately becomes problematic in building a defense for the “land inheritance” having relevance today because in the New Testament the apostle Paul tells us that circumcision in the flesh no longer has any value. According to Paul it is circumcision of the heart (in the Spirit) which matters. [Adam’s note: See especially the book of Galatians and the strong language Paul uses there toward those who attempt to push circumcision as a requirement.]

As we continue through the scriptures we find that the feast of Passover and unleavened bread are said to be an ORDINANCE FOREVER (Exodus 12:14, 17, 24) and the Sabbath was to be a covenant FOREVER (Exodus 31:16-17).

Yet the New Testament tells of that these were only shadows of Christ (Colossians 2:16-17) and that Christ Himself is our Passover (1 Corinthians 5:7).

The ministry of the Levitical priesthood (Aaron and his descendants) within the tabernacle is said to be a statute FOREVER (Exodus 27:21, Exodus 28:43, Exodus 30:21, Leviticus 24:1-3) and an ordinance FOREVER (Numbers 18:8). The wearing of the priestly garments by the sons of Aaron was also referred to as a PERPETURAL (FOREVER) statute. The ceremonial washing of the hands of the priests who served in the tabernacle was to be a statute FOREVER (Exodus 30:21).

Yet according to the New Testament this priesthood has been abolished and has given way to one that is greater and more glorious, and that is the Priesthood of the Lord Jesus Christ.

The Law of Moses also declares that the Levites were to be servants to the priests and this was to be a statute FOREVER (Numbers 18:23).

The law of the meat offering’s portion for the sons of Aaron was also to be a statute FOREVER (Leviticus 6:14-19).

The daily meat offerings offered by Aaron and his descendants was to be a statute FOREVER (Leviticus 6:20).

The commandment for Aaron and his sons not to drink wine nor strong drink in the tabernacle was to be a statute FOREVER (Leviticus 10:9).

The heave and wave offerings belonging to the Levitical priests and their families was a statue FOREVER (Exodus 29:28; Leviticus 10:15; Numbers 18:19).

Like the Passover, the Day of Atonement was also to be a statue FOREVER (Leviticus 16:29, 34, Leviticus 23:31). Yet according to the New Testament, those things which were done under the Law on the Day of Atonement served as a foreshadowing of Christ (Hebrews 10:1-4) and have now been taken away because Christ has become the High Priest of a greater and more perfect tabernacle.

With regards to sacrifices for sin, the Law of Moses also says that the sin offering of the red heifer was to be a statute FOREVER (Numbers 19:9-11).

Yet Hebrews 9:13-14 says, “For if the blood of bulls and of goats, and the ashes of an heifer sprinkling the unclean, sanctifieth to the purifying of the flesh: How much more shall the blood of Christ, who through the eternal Spirit offered Himself without spot to God, purge your conscience from dead works to serve the living God?”

As we can see, the use of the language FOREVER as it applied to the Old Testament promises, statues, and ordinances doesn’t mean “for all eternity” without any change as they originally were.

In studying the scriptures, we should consider the qualifying clause “throughout your generations” and other similar clauses. These should be taken into account when considering those things which were said to be FOREVER.

For instance, Genesis 17 says the covenant of circumcision and the land inheritance is FOREVER in view of THOSE GENERATIONS.

These references (above) regarding THROUGHOUT YOUR GENERATIONS are just a few examples of the many times this qualifying clause and others similar to it are mentioned in view of the FOREVERS in the Old Testament.

The Old Covenant was a covenant for God’s people in the flesh and was binding THROUGHOUT THEIR GENERATIONS, wherein the revelation of Christ was hidden in a mystery (Colossians 1:26).The forevers were “types” and “foreshadowings” of Christ.

God has saved us according to His mercy by the washing of REGENERATION, and renewing of the Holy Ghost (Titus 3;5) and that which was “in the flesh” has now given way to that which is “in the Spirit.”

The forevers of the physical covenant have given way and been translated to FOREVER in Christ!

The forever ordinances of things like Passover continue, but now it’s in Christ and not in the outward offering of animals. The same holds true for the land inheritance, the Sabbaths and all other FOREVERS of the first covenant. True inheritance and rest is in Christ!

8 By faith Abraham obeyed when he was called to go out to the place which he would receive as an inheritance. And he went out, not knowing where he was going. 9 By faith he dwelt in the land of promise as in a foreign country, dwelling in tents with Isaac and Jacob, the heirs with him of the same promise;10 for he waited for the city which has foundations, whose builder and maker is God.

11 By faith Sarah herself also received strength to conceive seed, and she bore a child when she was past the age, because she judged Him faithful who had promised. 12 Therefore from one man, and him as good as dead, were born as many as the stars of the sky in multitude—innumerable as the sand which is by the seashore.

13 These all died in faith, not having received the promises, but having seen them afar off were assured of them, embraced them and confessed that they were strangers and pilgrims on the earth. 14 For those who say such things declare plainly that they seek a homeland. 15 And truly if they had called to mind that country from which they had come out, they would have had opportunity to return. 16 But now they desire a better, that is, a heavenly country. Therefore God is not ashamed to be called their God, for He has prepared a city for them.

I know I’ve been rather silent on this blog for a while. I apologize if it seems like I’ve been ignoring comments, and I hope to get caught up with them soon – and posting more regularly as well.

A big reason for my absence is that my wife, Jasmine, and I moved three hours (or so) south earlier this week. In June and July, we also made numerous day trips to Cincinnati for job interviews and then to secure our housing. All that while, I was working 45-50 hours a week at my regular job and tutoring on the side. I’ve already begun to work here at our new location, but it doesn’t look like my schedule should be as intense (and I pray it won’t be).

Since August 2013 Jasmine and I were in Bowling Green, Ohio (about 25 miles south of Toledo) sot that she could finish a degree she previously started. Jasmine graduated in December, and it was just a matter of time before we moved from that small college town to a larger city. We’re not big fans of winter, so we were determined to head south, but we didn’t go too far. The Cincinnati area puts us about four hours away from our families in Canton, Ohio. 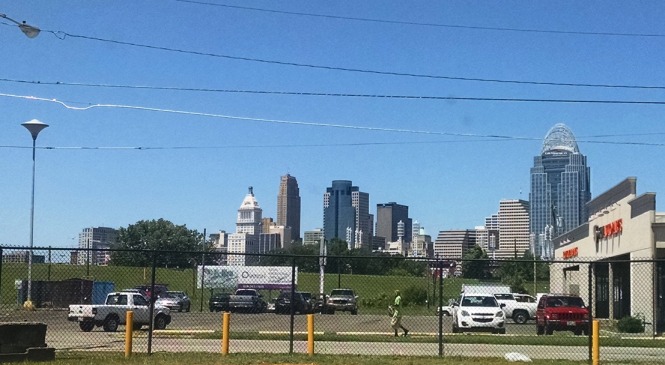 (Approaching Newport on the Levee from Monmouth Street; three blocks from where we live) 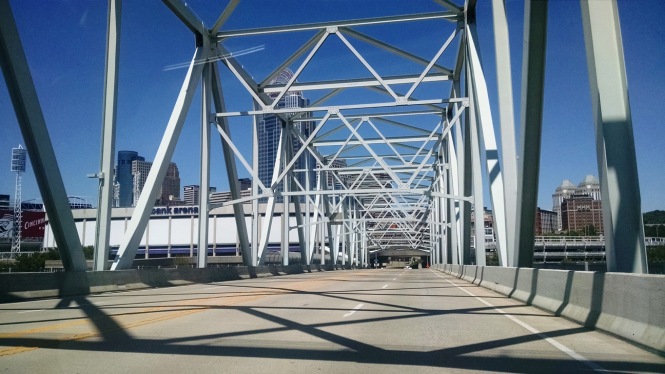 (Taylor-Southgate Bridge Between Newport and Cincinnati)

(That’s the Purple People Pedestrian Bridge over there.) 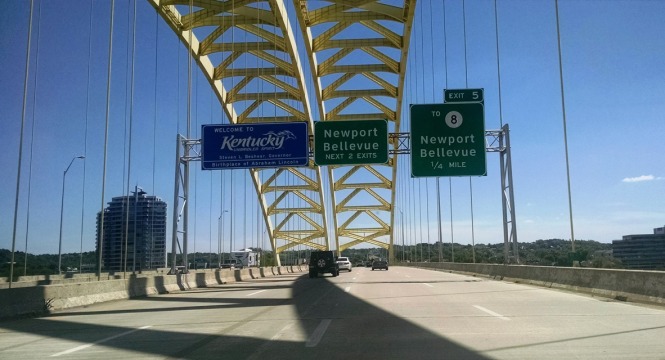 (This is the I-471 bridge, which connects Newport and Cincinnati, but is not walkable.) 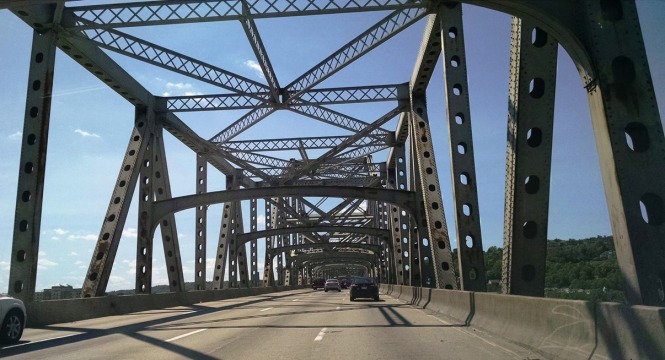 (This is the I-75/I-71 bridge, which connects Covington and Cincinnati, and is also not walkable.)

(This is the John A Roebling Bridge connecting Covington and Cincinnati – Credit: Wikipedia)

Bowling Green (and northwest Ohio in general) is so flat, but there are plenty of hills in the Cincinnati/Northern Kentucky area: 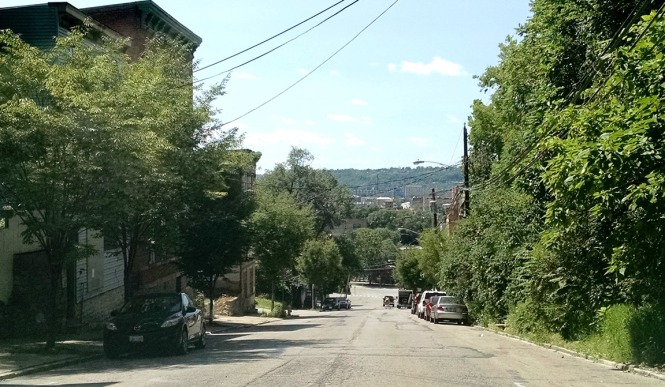 (Ravine Street, between the University of Cincinnati and downtown)

My wife really likes the more unique forms of public transportation, from the trolley (available along both sides of the Ohio River), to the streetcar (coming in September 2016), to the Ducks amphibian taxi: 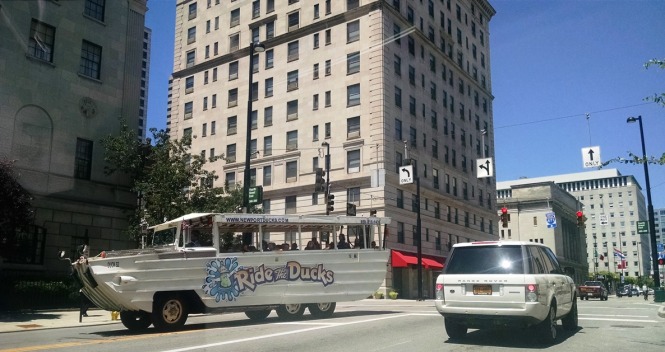 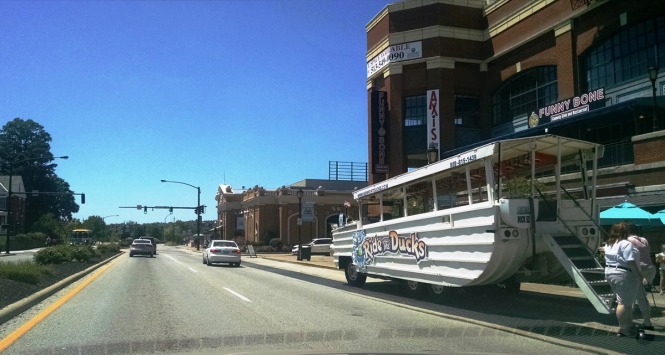 We took this picture last year of this same taxi in the water: 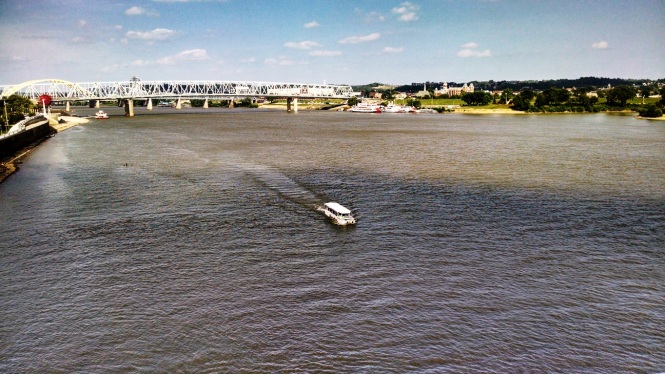 Here are a couple of photos we took this week while approaching downtown: 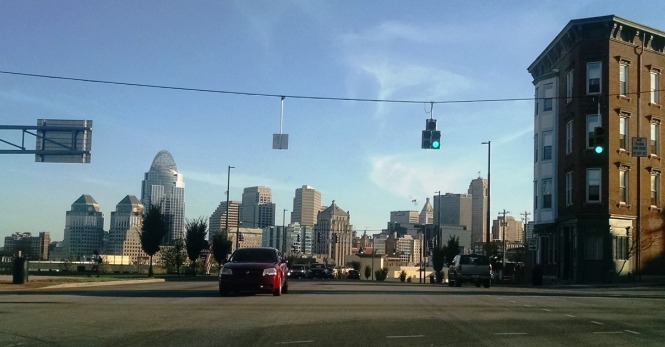 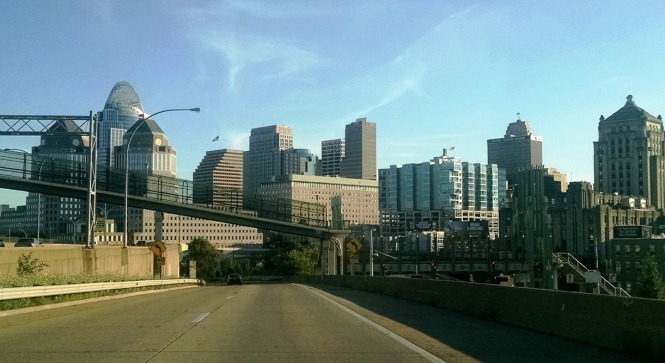 …and these were taken while driving through downtown: 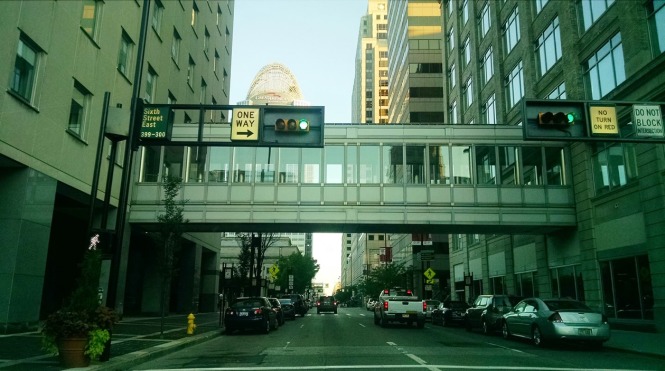 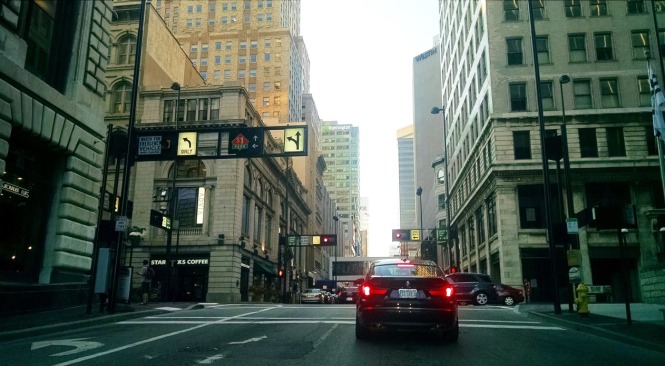 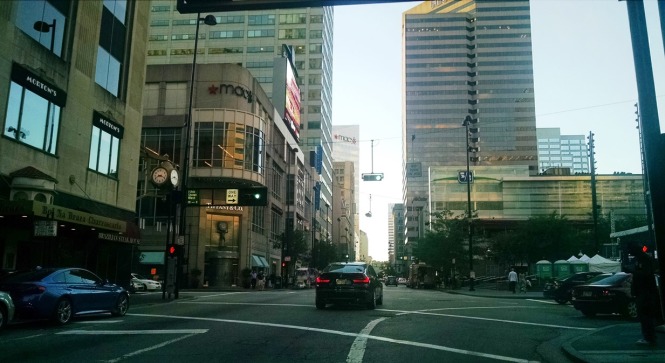 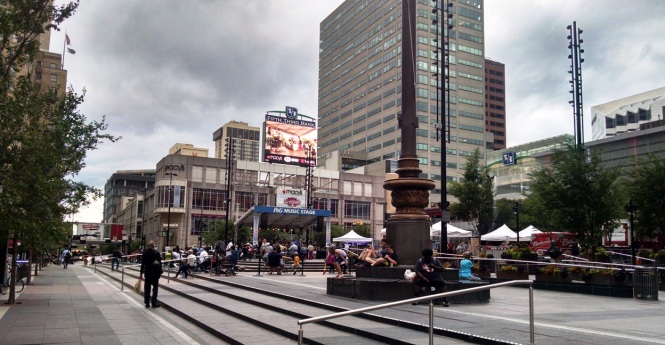 Finally, here’s a photo of Findlay Market in an area just north of downtown known as Over the Rhine: 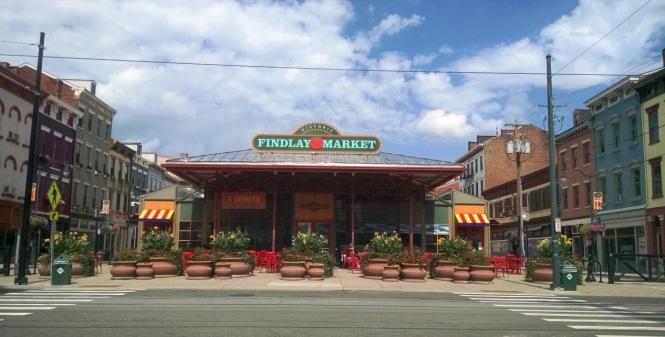 I’m interested in where my readers live as well. Please feel free to share something about your location in the comments below.