Bowling Green, Ohio, where my wife and I live, has a population of just over 30,000 people. Today (and for the next three days), however, that number is expected to balloon up to about 100,000 people. The Black Swamp Arts Festival has arrived.

The Black Swamp Arts festival is a free three-day art and music festival in historic downtown Bowling Green, Ohio. Over 60,000 people attend to enjoy the art, music, and atmosphere. Downtown Main Street is lined with over 150 juried artist exhibits from across the country.

Historic Downtown Bowling Green is transformed into a vibrant three-day Music and Arts Festival. Each year new and exciting art work is presented by visual and performance artists… The Artists at Work booths are hands-on community art projects for adult visitors. Visual artists create on-site as visitors watch, and sometimes try their hand at the craft. Participating artists include water colorists, acrylics painters, sculptors, glass bead makers, woodworkers and potters who demonstrate, answer questions, and share their knowledge of how they take raw materials and turn them into art. Kids areas have music making and a multitude of  hands-on art projects to take home.

We moved here on August 23rd last year, only about two weeks before the festival began, so that Jasmine, my wife, could finish a degree she began here in Fall 2008. I had seen a sign indicating that a festival was coming, but it caught me by surprise anyway. The first day of the festival I tried to drive over to the Bureau of Motor Vehicles to get my new license plate tag and sticker. The next thing I knew I was helplessly stuck in traffic just outside of the city limits, surrounded by a woods on one side and a cornfield on the other. As soon as I got a chance, I turned around and drove back home, but we did walk downtown to the festival later that day. Here are a few pictures from our visit to the festival last year: 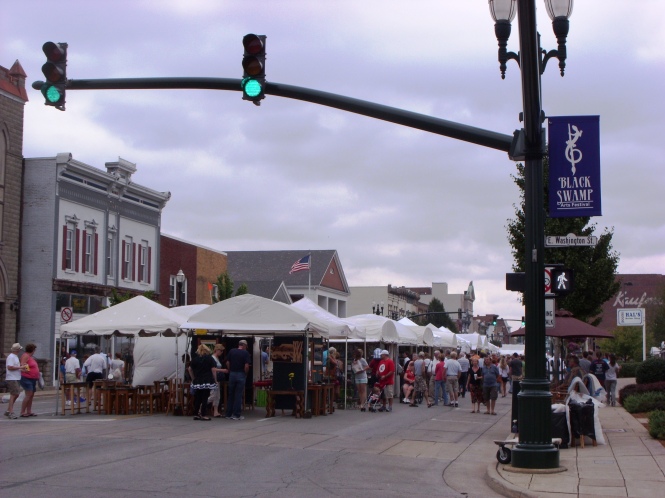 View of the festival entrance from the south side of downtown 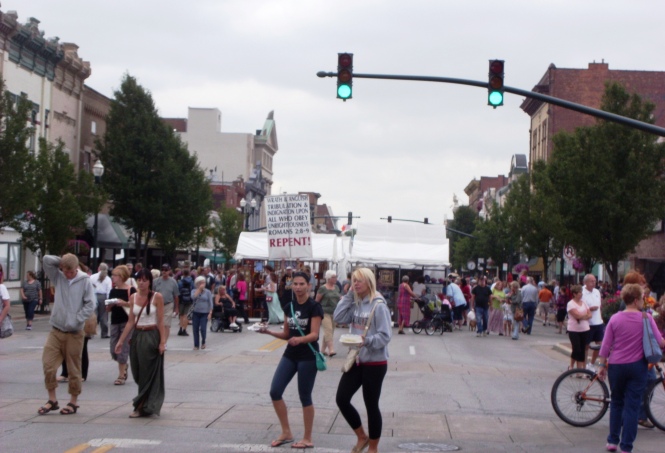 Street preachers were determined to get their message out. 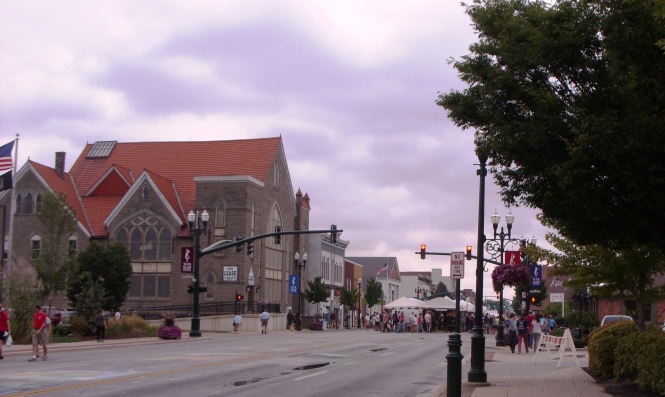 Why is the festival named after a Black Swamp?

Northwest Ohio and part of eastern Indiana used to be covered by a massive swamp. Historic Perrysburg describes the Great Black Swamp as “an oozing mass of water, mud, snakes, wolves, wildcats, biting flies, and clouds of gnats and mosquitoes” that covered an area nearly the size of the state of Connecticut. It stretched “40 miles wide and 120 miles long” from Perrysburg, Ohio in the north to Findlay, Ohio in the south, and from Fort Wayne, Indiana in the west to Sandusky, Ohio (now home to Cedar Point) in the east. (Bowling Green is located halfway between Toledo and Findlay, along I-75, and Perrysburg is located just south of Toledo. Photo Credit: Wikipedia)

Historic Perrysburg goes on to describe the history of this swamp:

Water, often up to the belly of a horse, stood on the surface until it evaporated in the hot summer months. When it rained, or thawed in the winter, it was water and muck. Much of the swamp was covered with an almost impenetrable forest of giant oak, sycamore, hickory, walnut, ash, elm, maple and cottonwood trees, except in a few prairie areas where limestone just under the surface would not support timber growth.

Not even native Indians went into the swamp except to hunt, and unless you could follow a blazed trail, it was easy to become hopelessly lost since you could only see but a few yards ahead.

The swamp was created 20,000 years ago when the last glacier retreated.

The enormous weight of the mile-thick ice pack pressed down and scooped out the earth beneath it to create a depression about 10 feet lower south of where Perrysburg sits on the river bluff. Thereafter, until it was drained, water stood in the silted wetland and clay in the ground prevented it from soaking in. When water was standing and flooding conditions occurred, large fish from the Maumee River and other streams could swim all over areas now covered by corn and soybean fields…

There was no end to the variety of sicknesses and maladies spawned from the mosquito-infested swamp. There was cholera, typhoid and milk sickness, but chief among them were malarial fevers generally known as “ague” for which people kept quinine powder on the table, along with salt and pepper, to sprinkle on their food.

The fevers caused people to have chills, or the shakes, and according to a doctor of the time it took them from three to five years to get over it. The shakes occurred from about the first of July until the first frost. They took hold of people and literally shook them up. The doctor wrote that so violent were the chills and shaking that when they came on, the very bed and floor would rattle.

The Black Swamp was Ohio’s last frontier, and beginning in the 1840s, it took several generations of determined farmers to drain it and make it the rich, flat farmland of today… It took back-breaking labor and construction of one of the greatest underground drainage systems in the history of the world to create the productive farmland we now drive by and take for granted just outside of Perrysburg.

According to Wikipedia, in the mid-1850’s it was a resident of Bowling Green, James B. Hill, who “made the quick drainage of the Black Swamp possible with his invention of the Buckeye Traction Ditcher.”

One of the many blessings I’m able to enjoy in my marriage (of 15 months and counting) is my wife’s beautiful singing voice. Back in April of this year, she posted five videos of herself singing on YouTube. Perhaps later she’ll add more songs, and even eventually some of the original songs she’s written which have never been shared publicly. With her permission, here are those five songs from seven months ago:

For anyone who notices that most of these songs follow a theme of hopes and dreams, it might be good to point out that they were posted at a time when we were forced to give up on St. Paul Cultural Village, the multicultural marketplace and community center we were developing. By April 30th, less than a month after they were posted, we had vacated the building we were renting for that purpose. Once I update the St. Paul Cultural Village website, I plan to share in more detail what happened with that project. For my wife and I, January – April 2013 was a period marked by a lot of pain and shattered dreams, but God kept and sustained us then, and He continues to do so now.

Today I’m  doing a review on a book by Singer called, “Timesaving Sewing.” I highly recommend this book to sewers of all levels. It offers amazing tips to save time while sewing.

Even the  book is efficient! It only has 128 pages. But each page is full of great pictures and step by step instructions on how to make sewing more efficient.

Below are some of my favorite pages from the book. Enjoy.

This page offers a highlighted section of  time management tips for your sewing project. 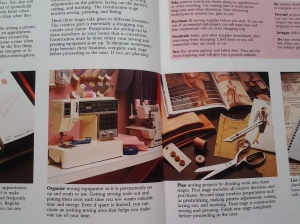 I love how this book offers a solution for setting up a sewing area. 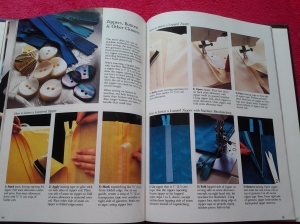 This amazing reference guide is on Amazon.com for only a penny right now! You can’t beat that. It’s honestly a VERY useful treasure that can be referenced for almost EVERY sewing project.

Taking a trip to the fabric store is always full of excitement, as you search for just the right supplies for your newest project. If done in a disorganized manner, however, it can cost you a lot of  unwanted time, money and even space (e.g. a messy sewing room).

Make your shopping excursions fun and efficient by designating a tote or backpack for sewing shopping trips. Pack your bag with items that will help you stay on track as you shop for your dream project.

Below is my tote bag and the fun trinkets I keep in it. I keep this tote in my sewing studio and only use it for sewing shopping trips.

I love this tote. I got it from Goodwill last year. I love that it has my initial on it, and the pink color automatically brightens my trip.

In every tote there MUST be a shopping list. Here I wrote my list with a fun purple gel pen. I got this floral printed paper for only a dollar at Dollar Tree.

Now this is not essential, but listening to music from your very own playlist can make the trip all the more fun.

A good organizing tip is to have a separate bank account for your sewing hobby along with a credit/debit card and or checkbook. This will ensure that your money for sewing is always available in your tote. If you don’t want a separate account you can always take out a certain amount of cash from your bank account and store it in your tote.

Along with my sewing debit/credit card, I carry my bus pass, a pen, and all of my receipts in this adorable pencil pouch: 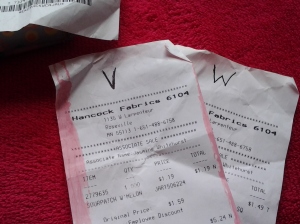 I label all my receipts with an initial that corresponds with the project I’m purchasing for. In this picture the V stands for vest, and the W stands for wedding dress. These are two projects that I’m working on at the moment. This helps me to keep track of how much I’ve spent on each garment so that I know how much it’s worth for selling purposes.

The last two essentials are a calculator and a small notebook. If you add up the cost of everything you’re throwing into your shopping cart, you will have saved yourself from unpleasant surprises at the check-out counter.

I use this notebook to jot down the fabric care guidelines for all fabrics I buy. Since care instructions are normally only found on the bolt (which you can’t always take home with you), it’s a good idea to get in the habit of recording the fabric instructions.

I hope I have inspired you to be more organized when going on your shopping excursions. Don’t forget that one benefit of carrying a tote is that you can also use it to carry your purchased items. This is not only efficient but it’s “green” as well.